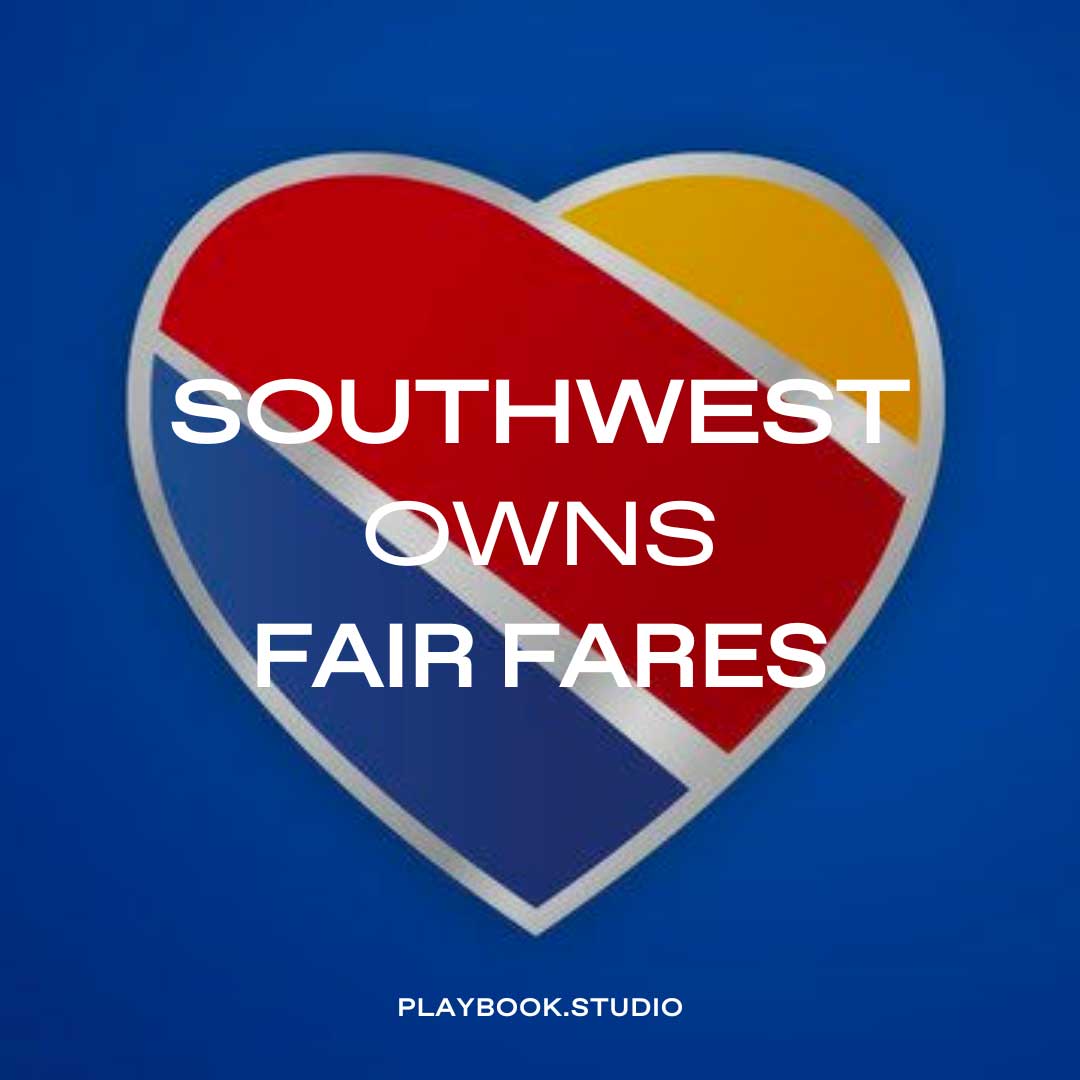 Posted at 12:22h in X owns X by JamesWaldron

From acrobatic flight attendants to crews that burst out in song, dance, and comedy routines, Southwest employees seem to genuinely enjoy their jobs, striving to make even the grumpiest of travelers feel the “LUV.” If you’ve ever been on a Southwest flight, chances are you have a funny story about a member of the airline’s 66,000+ charismatic staff (see the comments below for mine!). Whether or not Southwest recruiters exclusively select hirees from a pool of ex or aspiring comedians is up for debate, but one thing is for sure: Southwest packs a ton of value into their flights, both in tangible and intangible ways, making the brand worthy of claiming ownership over the concept of “fair fares.”

If you are unfamiliar with Southwest’s equal-opportunity ethos, the airline only offers economy-class seating on all of its Boeing 737 planes. Upon check-in, passengers are assigned a group (A, B, or C) and a number (1-60) that determines their boarding position. Once on board, all seats are first-come-first-serve. The only “upgrade” available is moving into an earlier boarding position (typically A 1-15) for around $40 each way. A 2012 study on the television series MythBusters, found this to be the fastest boarding method currently in use, by about 10 minutes on average. And before you scoff at this plebeian approach, know that every Southwest ticket grants its traveler two standard 50 lb checked suitcases, completely free of charge. With most airlines nowadays charging $50+ per bag per way, this is an enticing perk for overpackers everywhere. Southwest passengers can also change or cancel their flight for free up to 10 minutes (!) before boarding. And last but certainly not least, Southwest provides passengers with both a savory and a sweet snack on every flight. Once you get your hands on that tiny bag of Brownie Brittle, you’ll swear you’re riding first class (sorry Biscoff).

Echoing its quirky and lovable staff is Southwest’s playful advertising strategy. Leaning heavily into their Lover archetype, but adding comedic flare, past slogans have read, “Love Is Still Our Field,” “The Somebody Else Up There Who Loves You,” “You’re Now Free To Move About The Country,” “THE Low Fare Airline,” “Grab your bag, It’s On!” and most recently, “Low fares. Nothing to hide. That’s TransFarency!” However, the most interesting and Southwest-y slogan story you’ll ever hear was in March of 1992 after Southwest introduced “Just Plane Smart.”

Stevens Aviation, which had been using “Plane Smart” for its motto, accused Southwest of infringing on its trademark. Whereas any other company would promptly get its lawyers on the phone and prepare for a lengthy legal battle, Southwest CEO and co-founder, Herb Kelleher had another idea for settling the dispute. He proposed an arm-wrestling match to Steven’s Aviation CEO, Kurt Herwald (yes, really). Winner was to gain the use of the trademarked phrase and the loser was to pay $5,000 to the charity of his choice. An internal promotional video of the event showed the CEOs “training” (aka Kelleher being helped up from a sit-up to where a cigarette and glass of Wild Turkey whiskey was waiting for him). Although Kelleher lost the match for Southwest, Herwald immediately granted the use of “Just Plane Smart ” to Southwest Airlines anyway.